Editor’s note: This post was originally published in August 2016. It has been updated and republished in February 2019.

What is glutathione? It may be the most important molecule you need to stay healthy and prevent disease. It’s known for its anti-aging power as well as its benefit in fighting cancer, heart disease, dementia, and other chronic diseases. It’s also important for treating everything from autism and Alzheimer’s disease and more.

What is Glutathione and What Does it Do?

Glutathione is a combination of three simple building blocks of protein or amino acids − cysteine, glycine, and glutamine − and is produced naturally in the body. It is called the master antioxidant because it can regenerate itself in the liver after each “fill-up” of free radicals and go back to work. Free radicals are often the byproduct of normal cellular metabolic oxidation and toxic overload. They can lead to autoimmune diseases, several types of cancer, and even heart attacks.

Keeping yourself healthy, boosting your performance, preventing disease, and aging well all depend on keeping glutathione levels high. It is critical for immune function and controlling inflammation. It is the master detoxifier and the body’s main antioxidant, protecting our cells and making our energy metabolism run well.

Glutathione is critical in helping the body’s first line of defense against disease and illness – the immune system − do its job of fighting infections. It further supports the immune system in preventing cancer and other illnesses. Studies have also shown that glutathione can help in the treatment of AIDS.

Studies have also shown that glutathione can be effective in treating fatty liver disease, both alcoholic and nonalcoholic. It’s especially effective for people who make healthy lifestyle changes.

Glutathione is essential for maintaining healthy cellular mitochondria. Damaged or malfunctioning cellular mitochondria are part of the cancer process. This occurs when exposure to toxins and unhealthy cellular terrain combine to trigger a cellular defensive response. During this process healthy cells become cancer cells by reverting to a primitive form of respiration that uses glucose (sugar) instead of oxygen for respiration. They then refuse to die and keep multiplying.

The secret of the power of glutathione may be the sulfur chemical groups it contains. Sulfur is a sticky, smelly molecule which helps eliminate all the bad things in the body. Its stickiness allows it to capture damaging free radicals and toxins like mercury and other heavy metals.

Glutathione is critical for one simple reason: It recycles antioxidants. You see, dealing with free radicals is like handing off a hot potato. They get passed around from vitamin C to vitamin E to lipoic acid and then finally to glutathione which cools off the free radicals and recycles other antioxidants. After this happens, the body can “reduce” or regenerate another protective glutathione molecule and we are back in business.” 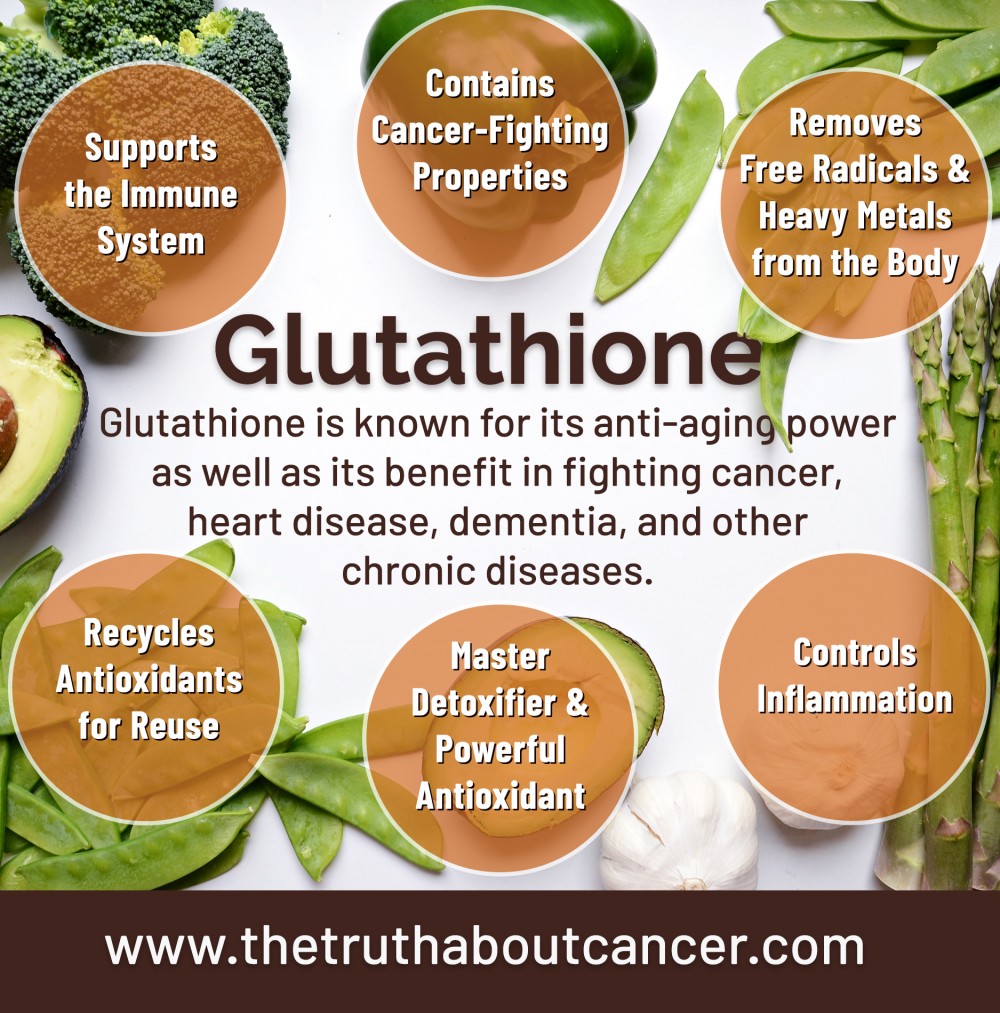 Normally, glutathione is recycled in the body − except when the toxic load becomes too great. When glutathione becomes depleted it can no longer protect against free radicals, infections, or cancer, and we can’t get rid of toxins. This leads to further sickness and soon we are in the downward spiral of chronic illness.

Active Glutathione is Known as GSH

Glutathione becomes inactive when it becomes saturated from doing its work of collecting free radicals, but it tends to regenerate itself in a healthy liver. Under ideal conditions, 10% of the glutathione remains inactive (or oxidized), while the other 90% is active. As the active glutathione (also known as GSH), drops below 90% and allows the inactive to increase beyond 10%, the struggle for optimum health begins to become a losing battle. When toxins build up, the GSH diminishes even more. When GSH falls below 70%, the immune system becomes critically compromised.

Foods & Supplements that Increase Glutathione Levels in Your Body

You can also increase glutathione by increasing your vitamin C intake or adding milk thistle or turmeric to your diet.

The reason for using precursors to boost your liver’s ability to create healthy glutathione levels is that supplemental glutathione has issues with getting through the gastrointestinal (GI) tract intact without being degraded.

Exercise boosts glutathione levels and helps boost your immune system, improve detoxification, and enhance your body’s own antioxidant defenses. Start slow and build up to 30 minutes a day of vigorous aerobic exercise like walking or jogging, or play various sports. Strength training for 20 minutes, three times a week is also helpful.

Other supplements which can help increase healthy glutathione levels include:

N-acetyl-cysteine (NAC) has been used for many years to help boost glutathione. Time release NAC is the best option for keeping levels high throughout the day.

Methylation nutrients, including folate, vitamin B6, and vitamin B12 are critical to keep the body producing and recycling glutathione.

Milk thistle (silymarin) helps increase glutathione levels and is famed for its ability to cleanse, protect, and regenerate the liver.

It is also worth noting that alpha-lipoic acid is a close second to glutathione in terms of importance for our cells. It is involved in energy production, blood sugar control, brain health, and detoxification.

Over 2 million people have joined the fight to eradicate cancer once and for all. Find real solutions and learn the TRUTH about cancer.

The post What is Glutathione and Why Do You Need it? appeared first on The Truth About Cancer.